On The Road To Elvenholme 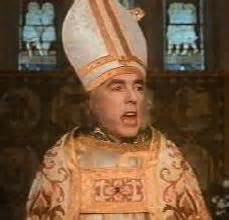 Returning to the village of Elrin after defeating the evils of the Barrow-Mound, the company discovers a caravan consisting of the newly-elevated Ecclesiarch of Valicia passing through the town en route to Gwinden Abbey to be invested by Bonifact Santarin himself. All of the rooms in the inn are taken, so our heroes are forced to rent the loft of a barn on the edge of town in which to spend the night.

The entire village is being enlisted by the village reeve to put on a feast for the Ecclesiarch, easily the highest ranking religious personage they have ever seen in the tiny town. But the company’s contribution in ridding the area of the Barrow-Mound cannot be ignored, and so the reeve invites them to the feast in the town square.

At the feast, the group discovers that the new Ecclesiarch is none other than the venerable Vener Agee, former Archoth of Farnth, who very nearly oversaw the wedding of Lady Sharena Langwurt (a.k.a. Elphaba) to Randarath Khrom, twenty-third in line to the throne of King Zargorath Khrom of Valicia, in the summer of 5001. The doddering old man warmly greets the company, and a fine feast was had by all. The company agrees to escort the Ecclesiarch to Elvenholme, and Elphaba offers to escort him all the way to Gwinden Abbey.

The caravan sets forth, and two days later the come across an empty watchtower at the border. Tarot spies what may be an advancing army in the foothills to the north north-west. The next day, Fayette greets two of her countrymen guarding the border, and the company passes into Elvenholme at last.

A Fairy Tale Do You Believe?